In my explorations the last couple days, I accidentally a couple kits of more-or-less traditional drum machine sounds for Maschine (software 2.1.2 or later) with my Euro stuff. Since I'm reasonably convinced this is the sort of thing that is of interest to the above-average AI reader, here they are. (4.3mb zip file.) It is a pair of kits with 15 samples each; I've utilized pad 16 in both kits for the Maschine plate reverb.

These can, of course, be utilized in any sample playback device; there are a pair of folders in the zip containing the raw samples. They will not have the benefit of the (generally mild) production in the Maschine software, as I didn't bake the effects or EQ or anything. 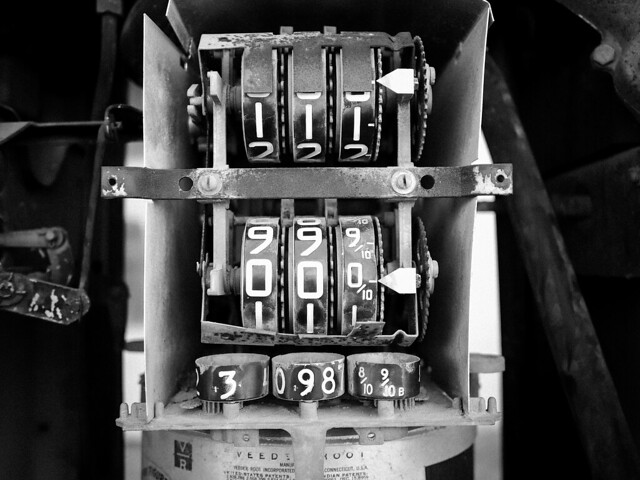 Happy New Year, AI-ers! 2014 was, like most recent years, pretty awesome for me personally and Audio Damage as a company. I don't believe in luck (or, well, magic of any sort) but if I did, I'd think I had some.

What's coming in 2015? On the AD front, some new hardware, and some updates to classic AD plug-ins. We'll also be making our first appearance at NAMM as a company with a physical presence. On the personal front, a new Sister Machine Gun record in March, and I'm beginning the phase of my life where speaking engagements at universities seem to be a thing I do, also in March at UCSB. During the next 12 months, I am going to attempt to do a Cool Thing Every Month here on AI (t-shirt, sample pack, whatever), as well as a monthly installment of the 10 Questions video blog on YouTube.

I Downloaded This Amazing Free Plug-in, And You Won't Believe What Happens Next...

by Chris Randall
63 comments
I'm experimenting with clickbait-style post titles. Other audio blogs appear to be testing the waters with this information abortion, so I figure "hey, why not join the crowd?" How am I doing?

Anyhow, this is just a general info-dump of goings-on in my little corner of the world.

1. Unless you live under a rock, you know about the Eventide freebie, UltraChannel. I actually wouldn't normally bring it up here at all, as even though the Eventide guys are BFFs of ours and make stupifyingly good plug-ins (and even better hardware), their plugs are iLok only. However, as a result of a UI contract I'm currently doing, I had to install and tame an iLok. (And, god forbid, PT11.) Since I have one now, I was all "fuck it" and furthermore "whatevs." And got myself an UltraChannel. (And all the other Eventide native plugs while I was at it.) I'll say this much: UltraChannel is almost worth sucking it up for iLok. A fantastic, creative channel plug that is light on the CPU, yet extremely capable. If you have an iLok, or are thinking about buying one of those little buttplugs, here's where you get the Ultrachannel; use coupon code 0F736710. It'll be like $249 or something in a month or two, so if you're gonna do it, do it now.

2. Just in case you think I might have changed my mind or am in any way endorsing it, fuck PACE and fuck iLok.

3. I'm pleased to report that my schedule, which was a bit hairy there for a while, is returning, slowly and surely, to its normal lazy, meandering ways, which means I'll be able to finish off the Audio Damage DRM Removal Event, and also bring the next Audio Damage plug-in to the finish line while Adam flails about in his Code Hole whipping Sequencer 1 in to shape. It was a little ridiculous there for a while, but I've cleared a majority of the nonsense now, and am back to being my usual self.

4. And finally, a question: what constitutes an "album" these days? Throughout my (first) career, I was all 10 SONGS OR BUST but the idea of a complete record seems to be slipping through the cracks in favor of a burst mode kind of release system. I tried this out a couple years ago, by pooping out 4 of what our oldsters call "EPs" in a row, and it was somehow... uh... unsatisfying? Even without physical media, there's just something about a cohesive chunk of music that is more visceral, at least to the maker. So my general takeaway: it is far easier to come up with 5 cohesive songs than 10, and the consumer seems to be indifferent. My forthcoming release that I'm just finishing up now is 10 tracks, but I'm left with the lingering impression that I should strip it to a pair of 5-track releases. Thoughts?
TAGS: Audio DamageBusy Busy BusyFree Shit
December 15, 2013

Insert Pun On The Name SEM...

A few months back, I was at my family reunion in Oregon, and I borrowed a barely-working original SEM from my good friend Jeremy. I trundled it back to SandLand in my carry-on, and a while later dropped it off at Five Star Engineering in Mesa for a thorough going-over and fixemup. It had a ton wrong with it, including some very old, very poorly-implemented mods. I had Five Star remove all the mods, re-cap it, and bring it back to its former glory.

And then I set it on my shelf, because I was busy remodelling a house.

Fast-forward to today, I was thinking "man, I bet Jeremy wants his SEM back one of these days." So I sat down to sample the living shit out of it, and this is the result. (90mb .zip file.)

I just sampled it directly with AutoSampler (looped back in to Live so it could control Silent Way Voice Control.) It is sampled at 48K, every 5th note, for 13 different patches. These are all Kontakt 2 .nki files, with no programming/looping/layering/anything, so they should load directly to virtually every sample playback device made.

Obviously, these would benefit from some programming and production; dry, this synth is fairly unimpressive. But there should be enough here for you to work with to make them your own. Enjoy, and Happy Holidays! If you want to spring for some bandwidth, as always, I'll never turn down a little drop in the Paypal bucket. But it is in no way necessary. I would be sorely disappointed if I found these for sale somewhere, but the worst I'll do is call you names in public to my thousands of Twitter followers and readers. Otherwise, they are unencumbered.
TAGS: Free ShitGrinch
Displaying 1 to 4 of 4 available blog entries.